What is a Livery Company?

The livery companies are trade associations in the City of London, almost all of which are known as the "Worshipful Company of..." their relevant trade, craft or profession. The medieval companies originally developed as guilds and were responsible for the regulation of their trades, controlling, for instance, wages and labour conditions. Until the Protestant Reformation, they were closely associated with religious activities, notably in support of chantry chapels and churches and the observance of ceremonies, notably the mystery plays.

Some of the livery companies continue to have a professional role today: for example, the Scriveners' Company admits senior members to that profession, the Apothecaries' Company awards post-graduate qualifications in some medical specialties, and the Hackney Carriage Drivers' Company comprises licensed London taxicab drivers who have learnt the "knowledge of London". Other companies have become purely charitable foundations, such as the Longbow Makers' Company.

The active companies, which currently number 108, play an important part in social life and networking in the City and have a long and proud history of cultural and education patronage. They retain voting rights for the City of London Corporation, the local authority with extensive local government powers.

After the Worshipful Company of Carmen was accepted in 1746 no new companies were formed for over 100 years until the Master Mariners in 1926 (granted livery in 1932).[2] Post-1926 companies are often called modern livery companies.

Formed in 1999, the Security Professionals' Company became the 108th livery company on 19 February 2008 when the Court of Aldermen approved their petition for livery. Two bodies, the Worshipful Company of Parish Clerks and the Company of Watermen and Lightermen, are recognised as City companies but without the grant of livery for historical reasons; three further guilds (the Company of Educators; Public Relations Practitioners; and, the Company of Arts Scholars) aim to obtain a grant of livery. 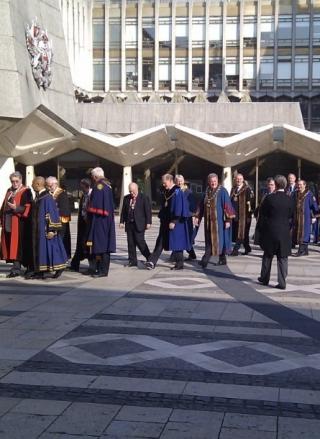